Posted on March 14, 2013 by walthamstowfoodies 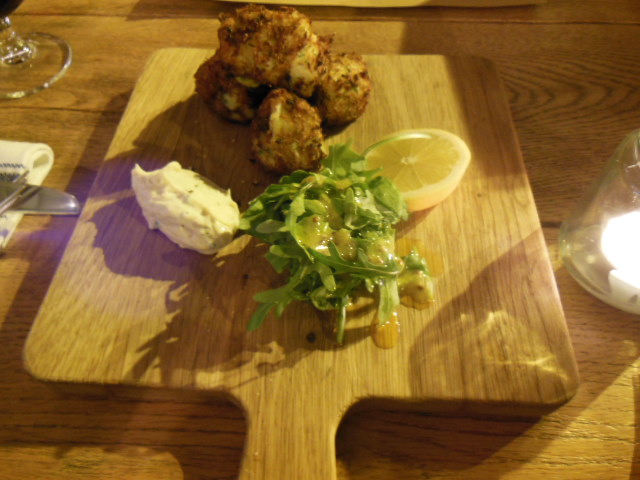 Is someone playing with the weather thermostat? It’s snowing in March when the daffodils are telling me its Spring! But it was one of the foodies birthday this week so we braved the icy weather and headed to Liverpool Road, Islington for a night at The Pig & Butcher.

This gastropub makes some impressive claims about the sourcing of its ingredients: fish caught from day boats off the South coast, vegetables from a farm in Kent, and rare breed meat – whole carcasses direct from the farm, butchered and smoked on site.

After a bit of pre-dinner shopping we settled down with a bottle of very drinkable French Peyrasse Rouge which is the cheapest bottle at £16 and some salt cod fritters with aioli, to peruse the menu. Starters for the adventurous included pigs head terrine and lambs tongues, but we opted for truffled celeriac & potato soup – comforting with a touch of luxury, and goose rillettes with cornichons. I fancied the Cornish fish pie next but felt obliged to try out the famous home butchered meat so settled on Old Spot pork loin, cabbage and roasted roots. The pork was a winner, tender and flavoursome; the portions are generous and well presented.

Unfortunately birthday girl went for the Kentish lamb leg, braised cardoons and macaroni which was less successful. We found the hot little pan of supposedly ‘creamed’ mac was dry and over seasoned with thyme. The lamb and veg were far too salty. This was a shame, but the staff were apologetic and voluntarily took it off the bill. To make up for this we had a dessert to share, an acceptable chocolate Torta Caprese (think chocolate brownie) with mascarpone.

We have a passion for good food – bought locally, cooked simply and shared with friends in Walthamstow, London and beyond
View all posts by walthamstowfoodies →
This entry was posted in Pubs, Restaurants beyond E17 and tagged Butchers, Gastropub, Islington, Old Spot pork, Pig & Butcher, Rarebreed, restaurants. Bookmark the permalink.

2 Responses to The Pig & Butcher – Islington