Posted on January 20, 2014 by walthamstowfoodies

Eating in Satsuma in Soho many years ago, I was introduced to Japanese food and boy was that an experience!  I learned the hard way (crying, coughing and spluttering) that the green lump of plasticine in my Bento box was wasabi, and that this horseradish paste should not be consumed in one sinus-clearing fiery mouthful – which is of course what I did. Once the tears had subsided and my taste-buds recovered I got quite a liking for sushi and Japanese food in general. So when I heard that a new Japanese restaurant had opened in Wanstead to rave reviews, I really wanted to visit. On this basis on Saturday we parked at the Snaresbrook Station end of the High Street and walked along – of course it’s right at the other end near Wanstead tube station.

Sumo Fresh has a modern, industrial feel in the main restaurant with a sushi conveyer belt and an open kitchen. We chose instead to sit in the warmer, wood-panelled room at the back which they bafflingly call ‘the second station’. We ordered Pumpkin Korokke (croquettes) and Takoyaki (deep-fried squid balls with bonito fishflakes) for starters. Two portions of the Korokke arrived instead of the one we’d ordered, but the staff were sweet and insisted we ate them anyway. 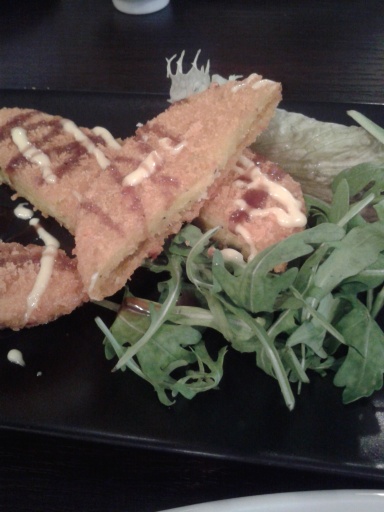 Next a couple of plates of sushi – 5 pieces of hand rolled Spicy Tuna Hasomaki (being chilli lovers we opted for spice level 3), and the Vegetable Roll Futumaki (vegetarians beware they include prawn and fish flakes!). The sushi was fresh, though the rice wasn’t quite sticky enough. They were stuffed full of crunchy baby vegetables, tofu and Japanese omelette or the raw fish, with generous portions of pickled ginger and wasabi on every plate. 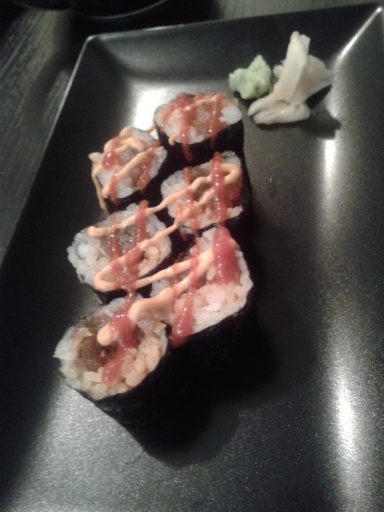 Finally we each had a Katsu curry rice bowl – one prawn and one chicken, Japanese comfort food. We’d ordered far too much as always happens when we skip breakfast and arrive hungry.

The service was efficient and attentive, bringing extra chopped red chillies and more water for the teapots. But it’s welcoming and friendly, not as intimidating as the West End sushi restaurants or as cold as the conveyor belt formula chains. It’s child-friendly too with plenty of kids happily tucking in to handfuls of sushi and edamame beans and bowls of miso soup. The bill was less than £35 including drinks – definitely worth a weekend trek to Wanstead; but if you’re feeling too lazy don’t worry as they do deliver to Walthamstow, free on orders over £20.

We have a passion for good food – bought locally, cooked simply and shared with friends in Walthamstow, London and beyond
View all posts by walthamstowfoodies →
This entry was posted in Restaurants beyond E17 and tagged Japanese restaurant, Katsu curry, Sumo Fresh, Sushi, Wanstead. Bookmark the permalink.