Posted on April 11, 2015 by walthamstowfoodies

We both have a passion for Indian cooking, but ordering in a takeaway curry or popping out for tandoori lamb chops, however good they taste,  just wasn’t going to cut it for a 40th birthday celebration. So off we headed to Cinnamon Kitchen – a sleek and stylish, award-winning restaurant serving creative, modern Indian food. Hidden away in an old East India warehouse in Devonshire Square in Spitalfields, amongst the hustle and bustle of the City, it’s the laid back sibling of Vivek Singh’s celebrated The Cinnamon Club and Cinnamon Soho. 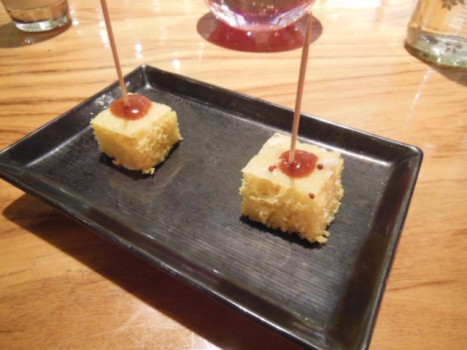 We opted for the £40 four course taster menu, promising a tour around the regions and flavours of India. Starting in the Eastern Bengali cuisine with a focus on vegetables and subtle and slightly sweet flavours, the spiced beetroot cake was crispy and well-cooked, but a bit boring. 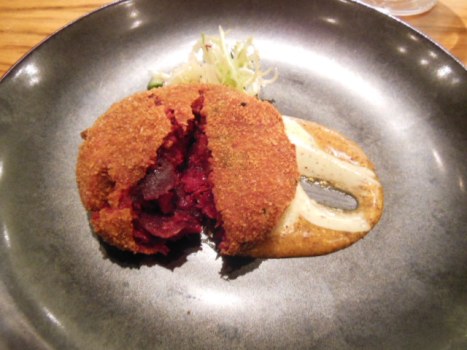 Things certainly improved from there onwards, the Keralan fish was a fillet of sea bream deliciously spiced with chilli, curry leaf and mustard seeds, delicately roasted in a banana leaf and served with a fresh coconut sambal. Kerala cuisine from South Western India is known for its rich, spicy flavours tempered with coconut and tamarind. 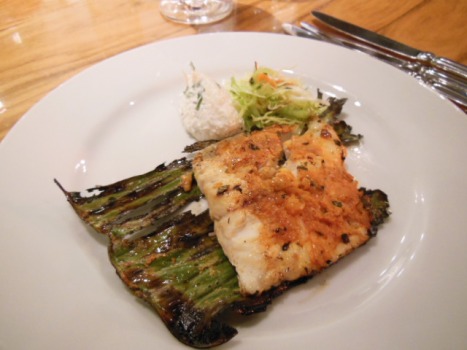 The show stopper however was the main course which was amazing. I don’t usually  choose lamb, it’s too fatty for me, but the lean, smoked saddle of Kentish lamb was rich and gamey. I would have sworn it was venison (which they also serve). The cooking is more French in style – searing and slicing the meat and serving it on a reduced sauce, but the flavours and Rajasthani corn sauce are authentically North Indian. I’m still dreaming about it and would happily go back just for that dish.

Finally, the smooth and sweet ginger panna cotta was creamy and delicate with a crispy, ginger crumble. A lighter finish than the traditional sticky, syrupy Indian sweets.

The contemporary decor mixes intricate lampshades and dark leather seating with bare floors and exposed industrial pipes in a mammoth warehouse space. The service is polite, informative and hyper-efficient. But essentially, come for the familiar curries and tandoori grills that they’ve taken, twisted, and re-thought to offer something new and unexpected.