Posted on March 21, 2016 by walthamstowfoodies 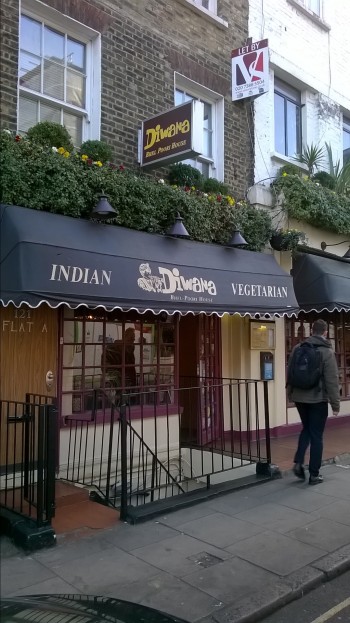 The Diwana Bhel Poori House restaurant on Drummond Street in Euston is an Indian institution, loved by locals, tourists, vegetarians and bargain seeking students and cheap-eaters. It’s been years since I last visited, but a couple of weeks ago I was at a conference nearby. Surrounded by the station offerings of chain coffee shops and street food outlets I fancied something different.

It’s not changed. The lunchtime veggie buffet is still fantastic value, offering eat as much as you want for about £7. In the evening they’re known for the South Indian dosas.  The service varies between forgetful, chaotic and grumpy. The decor  is basic wooden furniture, and metal plates and water jugs. But it’s the food that everyone comes here for. It’s not clever or flashy, it won’t win any Michelin stars or impress a first date, but it will satisfy, fill and comfort you with a massive range of healthy hot and cold veggie dishes. 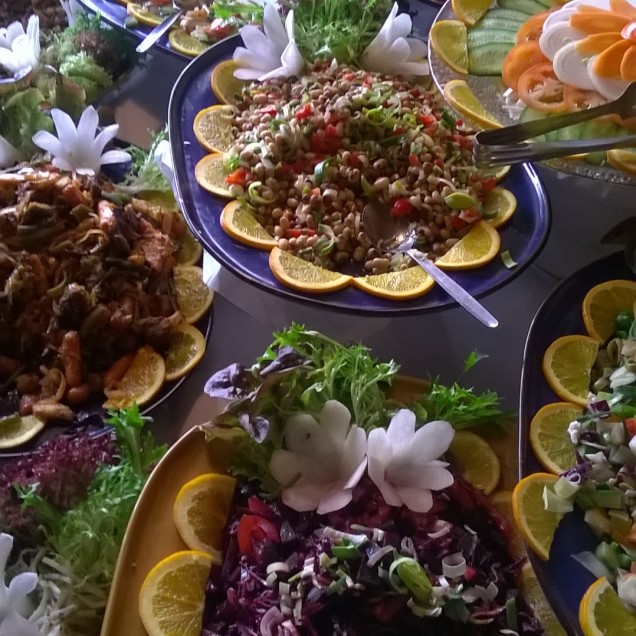 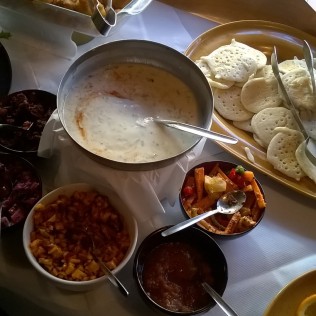 Taking my metal plate and a sharpened pair of elbows, I set off round the salads and snacks – plates of poppadoms, bhajis, little idlis, and chutneys then at least 7 or 8 different salads including lots of bean salads and red and white shredded cabbage salads. I could have happily stopped there, but next was the vast array of hot dishes to try.

There’s a feast of veggie curry favourites including lentil dhals, sag aloo (spinach & potato), paneer muttar (cheese & peas), pumpkin, cauliflower, channa (chickpeas), bhindi (okra), aubergine, Bombay potatoes plus some vegetables I couldn’t name, and of course rice and chapati breads. I just had to have a taste of it all.

Finally it was time for a clean plate and to hit the desserts. There was a range of sticky Indian sweets which I steered clear of, but I happily tucked into the massive fruit salad platter of 3 types of fresh melons, pineapple, apples and lychees and a little sweet dollop of kheer – Indian rice pudding. Delicious!

So, three courses, eat as much as you want, loads of healthy choices and all for only £7. If you’re waiting for a train, bored of the chains in Euston at lunch time, or starving for a curry, Diwana remains a bargain cheap eat in Central London.

We have a passion for good food – bought locally, cooked simply and shared with friends in Walthamstow, London and beyond
View all posts by walthamstowfoodies →
This entry was posted in Restaurants beyond E17 and tagged cheap, Diwana, Diwana Bhel Poori House, Dosa, Euston, indian, Restaurants Euston. Bookmark the permalink.