Posted on December 18, 2016 by walthamstowfoodies

After a recent review in Time Out, and one year after their pop-up opening nights in December 2015, it’s time to post about Mirth, Marvel & Maud – for any non-locals, this is a renovated old 1930’s cinema in the heart of Walthamstow.

We first visited for the free New Year’s Eve party in 2015, and since then we’ve wandered in and out for the E17 Designers Markets, beer festivals, birthday parties, random drinks, meals, and finally the newly opened theatre venue.

‘Maud’ – Theatre: We really enjoyed the press night performance of Around the World on Christmas Day – “a brand new off-beat comedy celebrating Christmas tales and traditions from all over the globe”. The interactive show mixes comedy, theatre performance, lots of singing and live music with festive elves and bizarre Christmas traditions. It runs until Christmas Eve. The new theatre space has only been open for a few months, housed in one of the smaller old cinema screens. This is the next stage in the restoration and conversion of this grand old cinema into a multi-purpose venue. Plans are to host music, theatre, film and comedy nights, adding to the Hoe Street alternative theatre scene.

‘Mirth’ – Restaurant & Bar: On the recommend of a friend we decided to try the restaurant. Every time we’ve ventured in before the atmosphere has just seemed too dark and moody to fancy eating there. This time (maybe because it’s winter) the woolly carpets and chintzy decor seemed more appealing and cosy, with a pianist ‘tickling the ivories’ and the spicy smell of mulled wine drifting from the cocktail bar.

The food received mixed reviews. The Devilled Potted Shrimp was so overly-spiced we had to send it back (and we both love chilli); and although it was taken off the bill, I got the feeling that no one ever tasted it or dared to tell the chef. However the Mussels in Cider were excellent and well priced at c.£6 for a starter size portion or £11 for a main, served with sourdough toast from Today Bread Bakery just across the road. 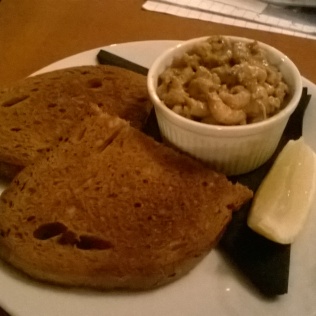 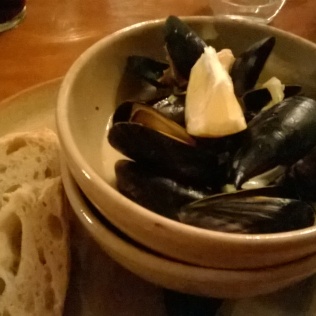 The mains were more consistent. The Hanger Steak was tasty, cooked rare as requested, and good value at £14, served with horseradish, chips and a handful of watercress. However the real bargain dish was the veggie/vegan Lentil and Pumpkin Curry with rice and onion chutney for only £7.50. But we got plate envy when we spotted the enormous homemade fishcakes being served to a nearby table… next time!
The drinks choice is vast, including the ticket-booth cocktail bar list, a decent -priced wine list and a range of craft beers including Antic exclusive Volden beer and a couple of non-alcoholic beers too. We’re making plans to return for the Sunday ‘Roasts + Jazz’ very soon.

We have a passion for good food – bought locally, cooked simply and shared with friends in Walthamstow, London and beyond
View all posts by walthamstowfoodies →
This entry was posted in Restaurants in E17 and tagged e17, marvel, maud, Mirth, music, old emd cinema, restaurant, theatre. Bookmark the permalink.