Posted on April 22, 2018 by walthamstowfoodies 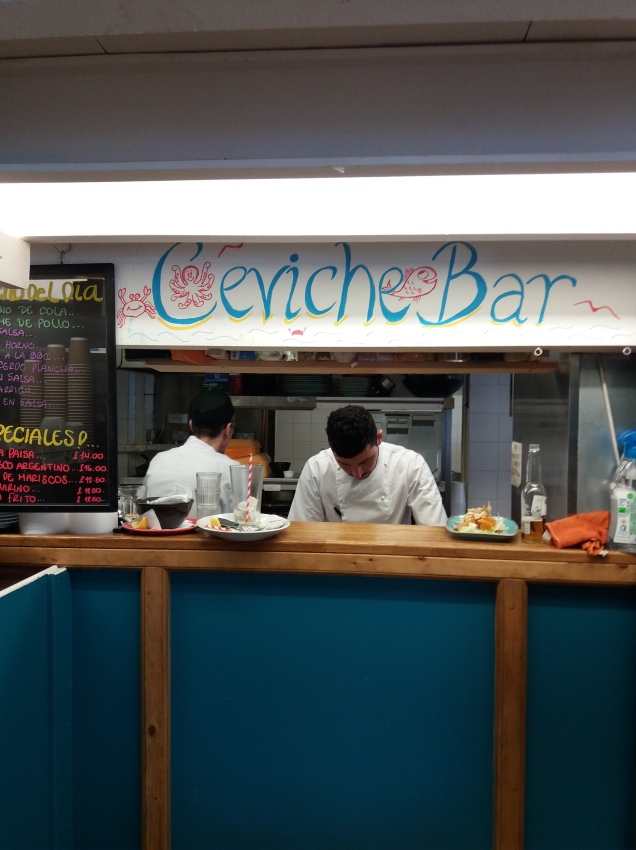 If this weather has you dreaming of hot sunshine and tropical beaches, instead of booking the first flight to Rio, jump on the tube to Seven Sisters at the weekend for a taste of Latino life.

Directly outside the station is Pueblito Paisa Cafe, housed in the Latin American market. If you’ve never visited go soon as it’s permanently under threat of closure and ‘regeneration’. Wandering around the market on a Saturday tests my nerves and my poor understanding of Spanish – it’s a noisy, lively jumble of hairdressers, grocery shops, butchers and food stalls. This is the place to get every imaginable type of dried chillis, PAN corn flour, chilli sauces, fresh juices, and dried beans. There always seems to be lots of music, shouting and laughter.

The Pueblito Paisa Cafe is open daily from 8am til 9pm serving excellent and cheap Colombian favourites such as meaty empanadas, arepas, sizzling churrasco steaks on a hot stone, cassava fries and of course good coffee. But at the weekend things go all Peruvian. We went on Sunday, entirely by chance, following a craving for empanadas and cold beer. We were transported to a back street in Lima, surrounded by locals and travellers, English and Spanish, all crowded round the Ceviche bar sipping on Cusquena beers and pisco sours. Latin disco hits were playing loudly and the Spanish league football was on the TV.

There’s an extensive Menu de Dia (daily menu). This week there was a choice of chicken soup or oxtail sancocho (another soup), then a list of mains including chicken, baked, fried or en salsa, BBQ ribs, or Beef. This comes with a glass of chilled Aguapanela, a sweet, lemony Colombian drink, all for only £9 .

We went for 1 x Menu and chose the chicken soup – including a whole chicken wing, potatoes, coriander and some scary but delicious chicken offal bits. Oh my, it was so delicious – like the chicken soup you should have when you’re ill to make you feel human again! 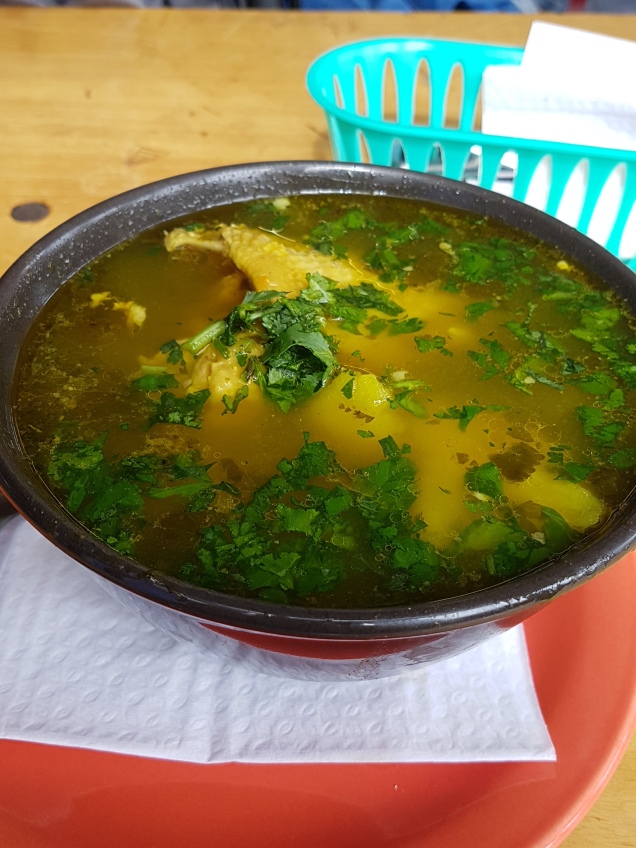 We fought over this until the ribs arrived – 3 sticky lumps of porky ribs in a lime infused BBQ sauce, served with long-stewed red beans, rice, grilled plantain and salad. It was fantastic value, all this for just less than a tenner.

But we couldn’t stop there – we had to try the Ceviche. There’s two choices, Classic (just haddock) or Mixed (haddock, octopus and prawn), and that’s what we went for. We ordered a large portion to share, with the classic accompaniments of popcorn and cold sweet potato. We were blown away by how delicious it was.  The fish was so fresh and light. The ‘tiger milk’ marinade was zingy with lime and fresh red chilli (we ordered ours spicy) and infused with red onion and celery slivers – only £9! You can add a side of Papa a la Huancaina, traditional Peruvian cold appetizer of boiled potatoes in a spicy, creamy sauce for a couple of quid. It was as good as any ceviche I’ve had in posh places in town.

Next came the highlight – Polpo a la Brasa. The octopus was coated in smokey paprika (we ordered it spicy again) and perfectly charcoal grilled, served simply with boiled potato slices, salad and a slick dollop of mayo. I love octopus and this was as good as, or even better than, in the London restaurants Truyo or Tragallan where we’ve eaten it recently, but for half the price at only £6.50.

Finally, to wash all this down, drinks include South American and Spanish beers for £3.50 a bottle, and wine if you want it. But the most popular drinks are the fresh exotic fruit juices (in milk or water depending on your taste) such as Mora, Lulo, Guanabana or Guava. A true taste of sunshine!