Posted on May 11, 2019 by walthamstowfoodies 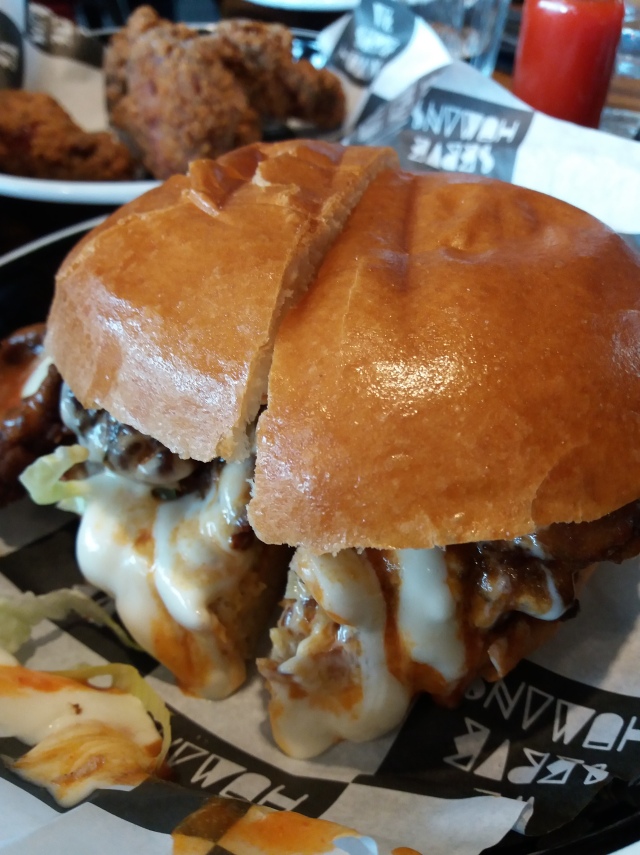 We’ve been waiting eagerly for the opening of The Collab. Ever since Grillstock, Yum Yum Thai and Ekco cocktail bar departed last year, that bit of Hoe Street, E17 has been looking particularly depleted. So the collaboration of local craft beers from Leyton’s Signature Brew and specialist burgers from We Serve Humans sounded promising.

We went to try it out last week, and although The Collab has only been open a few weeks it already it feels like a smooth operation. Grillstock’s massive meat smoker has been removed and the bar’s been pushed back giving the restaurant more table space. Apart from that, the decor remains – stripped-back pine, bare concrete, steel and street art, with a great open kitchen to watch the burger magic happen! 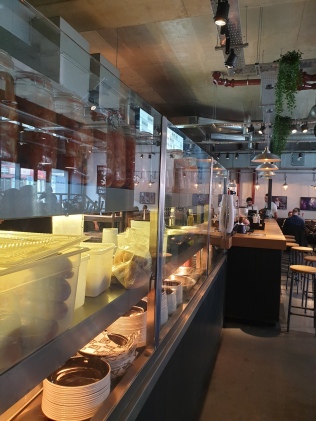 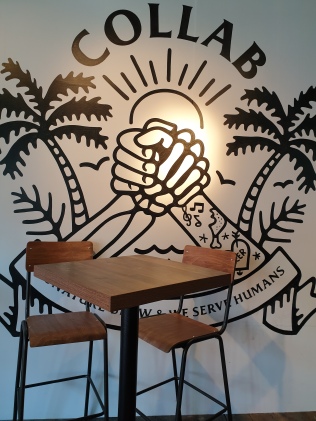 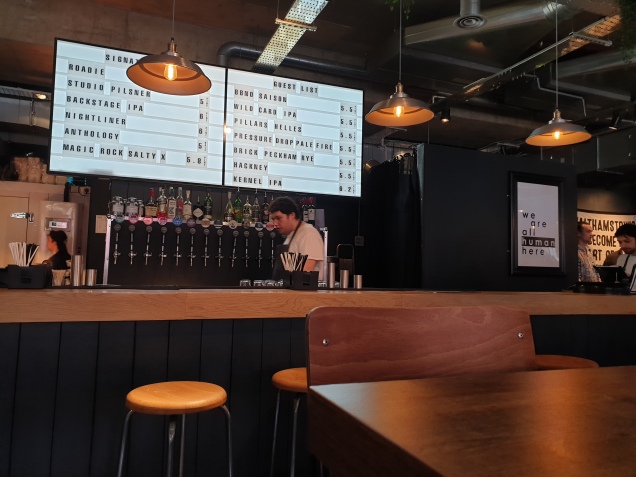 Behind the bar there’s 16 beers on tap including Signature Brew’s award-winning beers straight from the brewery. I sampled the deliciously fresh, hints of grapefruit, Roadie IPA – £5 a pint. There’s also Studio Pilsner, Backstage IPA and Nightliner coffee porter. If that wasn’t enough there’s guest beers from other local breweries and further afield, as well as wine, spirits, and fridges full of cans and alcohol-free options, plus local Perky Blenders coffee. 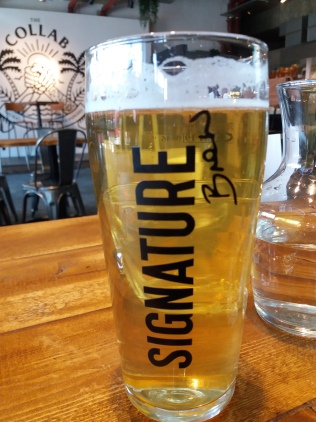 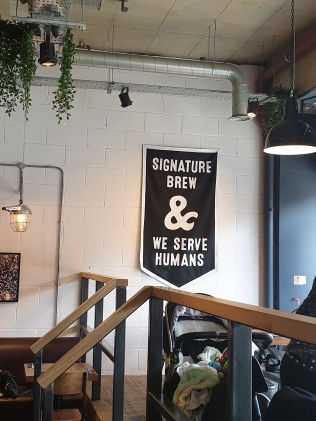 So, on to the food. We Serve Humans is headed up by Paul Human, a lovely friendly soul wandering around overseeing the kitchen and bar on our visit. Paul is passionate about his food and can explain in detail the ingredients in the house sauces or how the kimchi is made. And because of this enthusiasm and dedication to good food they’ve won awards including winner of best Buffalo Wings at WingFest 2017.

We started with the Southern Style wings (£6.50) marinated in ’12 secret spices’ with a choice of sauce. They are so good, ever-so crispy and not at all greasy. The sauce we chose was the ‘Humans Own Hot Sauce’ – damn it’s HOT! but also delicious, and dangerously addictive with fermented flavours of Scotch Bonnet chilli peppers. 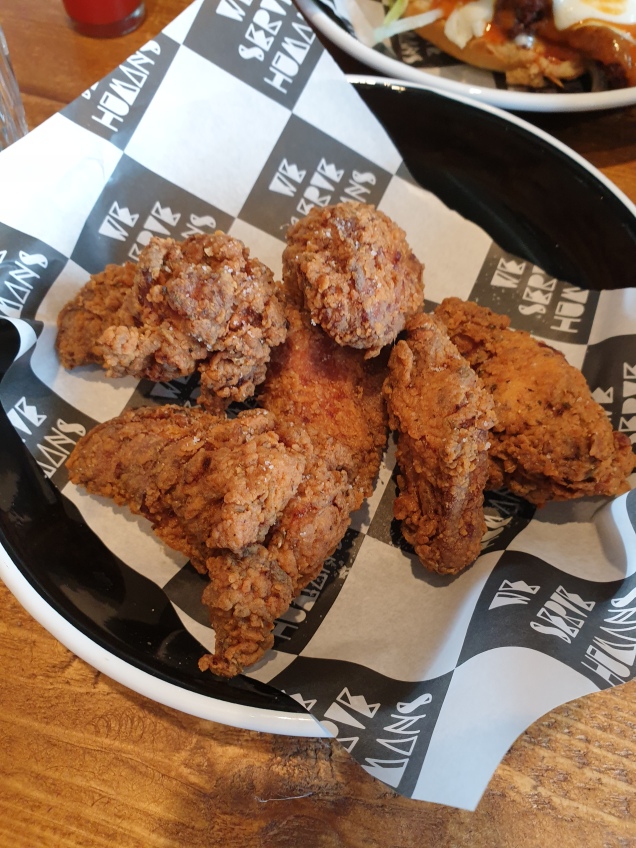 Next we ploughed into the burgers. A good burger is a thing of beauty – and the award-winning ‘End of Democracy’ – beef, loaded with cheese, chuck and shoulder chilli-con-carne and jalepenos (£11) was probably the best burger we’ve ever tucked into. A finger-licking mess, but in a good way – like “OMG this tastes amazing”, rather than “Oh I have sauce pouring down my arm!” The bursting flavours of the beef and the chilli are amazing – not a battle of the sauces found in some overloaded burgers. 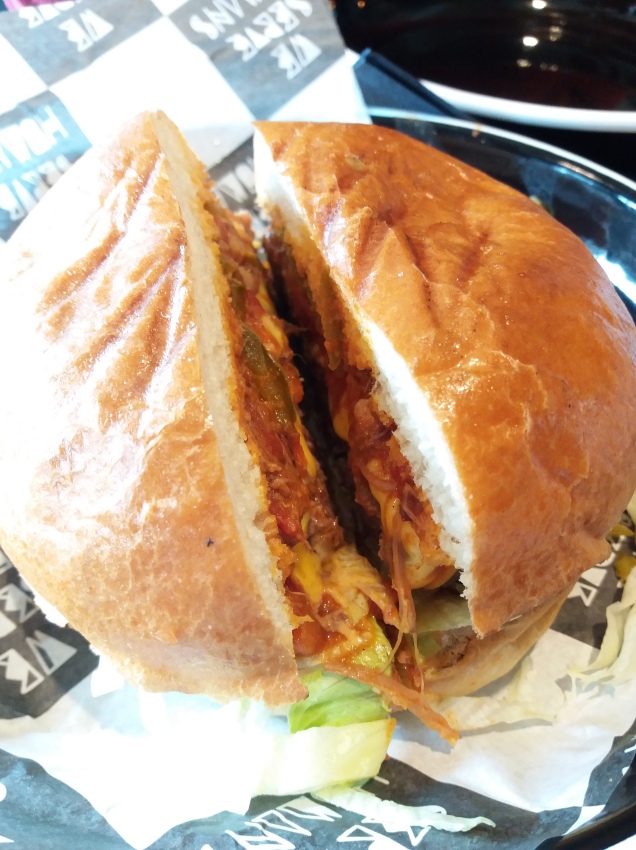 For the chicken burger we picked ‘The V2’ – a spicy rocket of a burger – buttermilk fried chicken thigh, combining the spicy Buffhello hot sauce (used in the famous Buffalo Hot Wings), and a blue cheese topping (£9.50). Using thigh meat gave it a tasty, sweet chicken flavour, and it was another saucy, delicious dish. They offer gluten free buns, vegan and veggie options, and dairy free alternatives for the buns and cheese too.
All the sides came in a large, enamel tin-full serving. We chose sides of a tasty beetroot House Slaw, simply dressed in vinaigrette and crunchy sunflower seeds (£3.50) and fries – Truffle fries for the vegans (£4) and Dripping for the meat-eaters (£3.50), both hot, crispy and completely moreish. 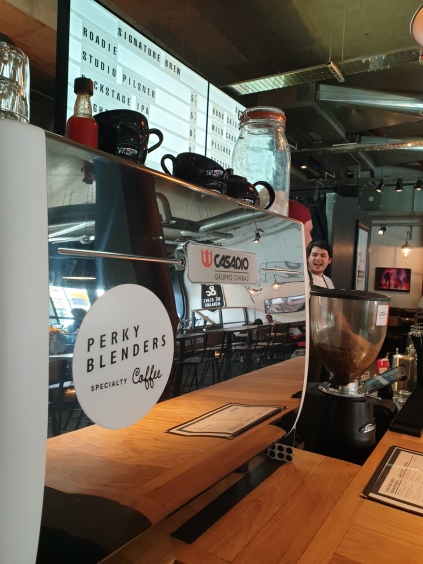 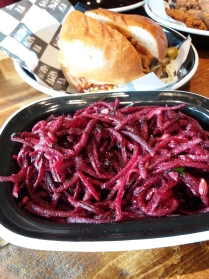 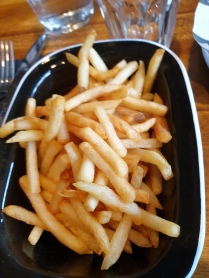 The only downside? – no desserts as far as we could see and a chocolate brownie would have been the perfect finish with a Perky Blenders coffee.

The Collab is open for just drinks, snacks or full meals, every day lunch til late with the kitchen open til 10pm (9pm on Sun.)